The fact that people from all over the world voluntarily came together to write articles in order to create a freely accessible multilingual encyclopedia on the Internet seemed at the very least an extravagant idea back in the year 2001, when Wikipedia was born. However, it is nowadays among the ten most visited and most frequently searched websites on the Internet. Its founder, Jimmy Wales, reveals the keys of his success in this interview, in which he also denounces that the current increase in censorship and government control on the Internet poses a serious threat to our free access to knowledge.

Let’s talk about the origins of the project. How did you come up with the idea? Had you ever imagined that Wikipedia would revolutionize the way we currently interact with information on the Internet?
No, I do not think it was until a few months ago, when Wikipedia really started to grow, that I started to imagine its full potential. Wikipedia was founded on a basic idea: that anyone could participate in creating and sharing the sum of all knowledge. Originally, Wikipedia started as a feeder project for another venture, Nupedia, which was based on a peer-reviewed model. After two years, Nupedia only had about a dozen articles, while Wikipedia reached about 1,000 articles in its first few months, and 20,000 articles by the end of its first year. It became clear that Wikipedia’s model was successful, and incredibly unique — the idea that people from all over the world can and want to write an encyclopedia! Seventeen years later, a movement has built up around Wikipedia. Today, we are hundreds of thousands of people who love Wikipedia and are passionate about free, reliable and neutral information.

“Censorship and surveillance are among the biggest threats to free knowledge resources like Wikipedia. Governments have become more sophisticated in their ways of suppressing criticism, and we have seen a steady rise in censorship around the world.”

Indeed, one of the first criticisms that Wikipedia received was related to the veracity of its contents. How did you overcome that threat?
Volunteer Wikipedia editors work hard to make sure that information on Wikipedia is neutral and based on reliable sources. In fact, neutrality and verifiability are two of our three core policies. Volunteer editors have created tools and processes to monitor information published on Wikipedia and to address content that does not meet the site’s standards. There have also been several studies, including studies from the journal Nature and Oxford University, which have found that Wikipedia is as reliable as other encyclopedias, including Encyclopedia Britannica –if not more so. Overall, this process works well, and we see this open model as one of Wikipedia’s core strengths.

And now, in your opinion, what are the main threats for Wikipedia?
Censorship and surveillance are among the biggest threats to free knowledge resources like Wikipedia. Governments have become more sophisticated in their ways of suppressing criticism, and we have seen a steady rise in censorship around the world. Wikipedia is a place where people come to learn about the world around them. I am a firm believer that better understanding leads to better decisions, and I think our world could really use more understanding in today’s climate. Censorship and surveillance place limits on the ways we can seek to understand, and this is an area of concern that we need to actively address.

“There is always the possibility of failure with any endeavor.”

Did you ever feel that the project could be jeopardized or even fail?
There is always the possibility of failure with any endeavor. Having people from all over the world come together to write articles for an encyclopedia? And yet, hundreds of thousands of people do. I may have been the first to start Wikipedia, but our volunteer communities are the ones that have actually ensured its continued growth, success and sustainability for years to come. 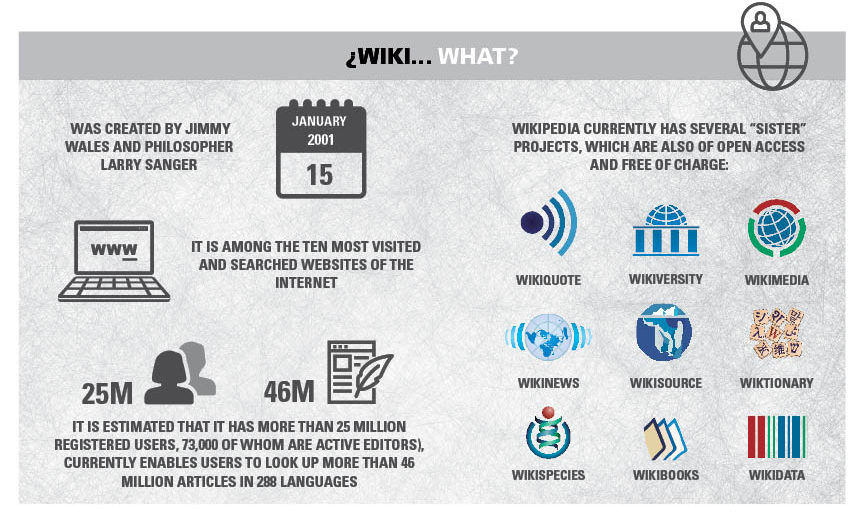 What would you say has been the most difficult decision you have had to make since the beginning of Wikipedia?
The thing about me is that I joke about myself that I am a pathological optimist. I generally think everything is going to be great. So this means that I find questions about “difficult decisions” to be hard to answer, because that does not describe how I experience the world.

“¿Will Wikipedia look different in the year 2030 than it does today? Who knows! But I do know that we have a strong path to guide us in reaching a brighter future for Wikipedia and free knowledge in the world.”

A world that is constantly changing. Like Wikipedia, an idea that has grown over the last few years thanks to parallel sections such as Wikimedia Commons, Wiktionary, Wikisource, Wikibooks, Wikinews, Wikiquote, Wikispecies, MediaWiki, Wikiversity, Wikivoyage and Wikidata. What are the limits of your project? How do you foresee it ten years from now?
Over the past year, our movement had a series of global discussions to define the future of the Wikimedia movement by the year 2030. Volunteers, Wikimedia affiliates, partners, researchers and more joined the conversation, which we called Wikimedia 2030. We asked ourselves questions like, what role do we want Wikimedia to play in the world? What are the biggest opportunities and challenges that lie ahead of us? What trends in technology, education, and access will shape our future?
The process, informed by research, was fascinating and led to a direction to help guide the future of our movement. We agreed that we want to ensure Wikipedia continues to evolve to meet the needs of future learners and knowledge seekers, for example, through new knowledge formats and access modes. We also agreed that we want Wikipedia to become a truly global and inclusive space where anyone who wants to share knowledge on Wikimedia sites can do so. And we learned that Wikipedia has a voice when it comes to supporting policies and values that have enabled collaborative projects like ours to thrive.
Will Wikipedia look different in the year 2030 than it does today? Who knows! But I do know that we have a strong path to guide us in reaching a brighter future for Wikipedia and free knowledge in the world. I am looking forward to seeing where we go next as we build the next chapter of our future.

The adventure of knowledge

With a Bachelor’s Degree in Finance from Auburn University and a Master’s Degree in Finance from the University of Alabama, Jimmy Jimbo Wales (Huntsville, Alabama, USA, 1966) is the creator, together with Larry Sanger, of Wikipedia. He is also the Chairman Emeritus of the Wikimedia Foundation, the non-profit foundation that runs it. From 1996 to 2000, while he was working as a stock market investor in Chicago (a time during which he earned enough money to stop working altogether, according to Wired magazine at that moment), he founded Bomis, an erotic content search engine whose funds enabled the creation of Wikipedia’s predecessor: Nupedia. The project, a free-content nature encyclopedia written by experts –with Larry Sanger as editor-in-chief–, lasted until the year 2003, and in part, it disappeared due to the birth of Wikipedia two years before, since, unlike Nupedia, this site was publicly editable before entering the peer-reviewed process.
Among other awards, Wales was included in 2016 in the list of the 100 most influential people in the world (Scientists and Thinkers category) published by Time Magazine. In 2015, Wikipedia received the Princess of Asturias Award for International Cooperation.

This website uses cookies to improve your experience while you navigate through the website. Out of these, the cookies that are categorized as necessary are stored on your browser as they are essential for the working of basic functionalities of the website. We also use third-party cookies that help us analyze and understand how you use this website. These cookies will be stored in your browser only with your consent. You also have the option to opt-out of these cookies. But opting out of some of these cookies may affect your browsing experience.
Necessary Siempre activado

Any cookies that may not be particularly necessary for the website to function and is used specifically to collect user personal data via analytics, ads, other embedded contents are termed as non-necessary cookies. It is mandatory to procure user consent prior to running these cookies on your website.